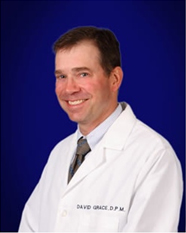 David Grace, DPM, has been practicing Podiatric Medicine in Frederick and Mount Airy, MD, since August 1997. He is the team Podiatrist for both Hood College and Mount Saint Mary's University athletic teams. Dr. Grace is certified in foot surgery by the American Board of Podiatric Surgery, and is a Fellow of the American College of Foot and Ankle Surgeons.

Dr. Grace graduated from Youngstown State University in 1990 with a Bachelor of Science degree. While a student at Youngstown State he was a two-sport athlete, competing in both track and cross-country events. He then went on to Temple University in Philadelphia, where he obtained his Doctorate of Podiatric Medicine in 1994. While at Temple, Dr. Grace received the Gartha E. Wolfe Scholarship for academic excellence. Dr. Grace then moved to Pittsburgh, where he completed a three-year surgical residency at both the Podiatry Hospital of Pittsburgh and the Western Pennsylvania Hospital.

Dr. Grace is on staff at both Frederick Memorial Hospital and Frederick Surgical Center. He specializes in reconstructive surgery of the foot and ankle, and in sports medicine.

Foot & Ankle Specialists of the Mid-Atlantic